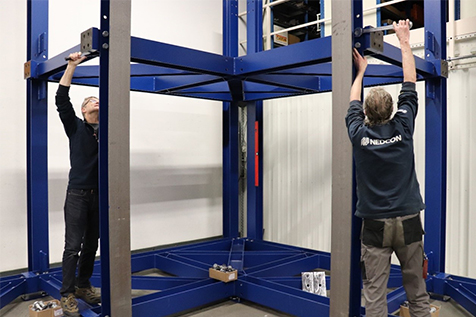 Over the past decades, “design by testing” has become increasingly important for the industry and therefore also for NEDCON. The trend over the past 10 years has been to test increasingly larger assemblies. This often involves the complicated interplay of all parts and connections in the construction. Computer simulations of thin-walled structures are as good or as bad as the underlying modeling. Therefore, there is a need for validation / calibration through testing.

Need for a large test frame
Large assemblies, such as a bracing tower, do not fit in the existing test frames. "Supporting" against the building columns and / or attaching to the concrete floor, is only possible with limited forces. In order to be able to test large assemblies with high forces, there was a need for a large test frame to meet current and future test requirements. This is why our Design Principles & Prototyping department developed the NEDCON Test Wall (NTW).

Assembly started
The actual assembly in the Test Department started in January 2021. It is already clear how impressive the NTW is. Another 100 meters of bracing profiles have to be added in February and March. After that, the NTW is basically finished.

In general, the NTW allows us to test larger and more complicated constructions and assemblies.
For example, we can now run the following types of tests:

The NTW allows us to integrate new test setups. In addition, when old setups need to be replaced, we aim at integration in the NTW.
Examples are:

Of course, the NTW can also be used for standard EN15512 tests, project specific tests and R&D tests. The NTW is expected to be ready for use from Q2 2021.

We are very excited to get started with testing!